The Story Behind Scrambled Sentences 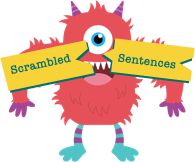 Outside South Lake Elementary School in mid-February, snow was still piled high atop grassy medians and street corners. Inside, kids raced, hopped, spun, and meandered around the warm cafeteria. It was pizza time! This was my first visit to Dream Academy's high-quality afterschool program for underserved students in grades 2 to 5, mostly English Language Learners (ELLs) who could use extra support. Students powered up with a healthy late afternoon meal before a 45-minute program of learning through play. Today, for 22 second-graders, those 45 minutes were dedicated to practicing academic language with Speak Agent!

Dream Academy staff and I raced to pull out 22 Chromebooks, login on each, and point the Chrome browser to the right URL while the second-graders lined up outside our classroom. I was a little nervous because today we were sharing a new game called "Scrambled Sentences." And we hadn't even completed our usability lab test yet. In fact, the game had no audio or animation and I was worried that students would not finding it engaging enough to get through a whole 45 minutes. When managing a class full of second-graders, 45 minutes sure feels like a long time!

The Scrambled Sentences game takes a short multi-sentence story from your reading materials and scrambles the word order into utter nonsense. Then it presents one sentence at a time to students, who need to put the words back in the right order. The words display inside puzzle pieces, so that shapes, case, and punctuation offer clues as to the right order. The game gives instant feedback and allows self-correction of mistakes and encouragement along the way. As sentences are fixed, the story builds. At the end, when the story is all fixed, players can listen to the story read aloud as text-to-speech. There are four game levels to try, which determines how many starting clues you get to solve the puzzle. 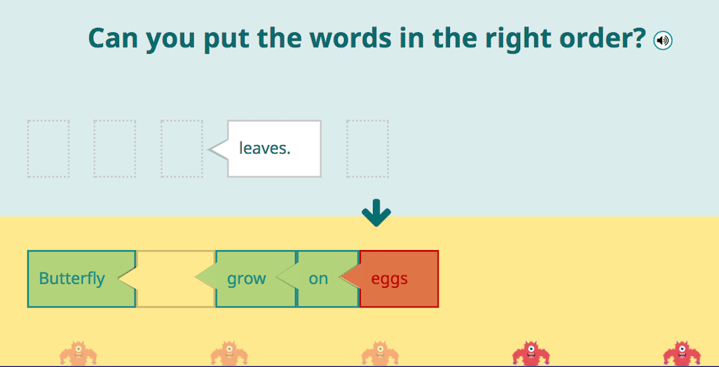 Of course, half of those wonderful features weren't built yet in February when Dream Academy graciously permitted us to run this test. As for content, all I had was one very brief passage from Frog and Toad built into the game. Now you see why I was so nervous! Fortunately, Jorge Perez, our lead developer on the game, had brilliantly built in a secret trick for student engagement. It was simple. I had a tool for changing the story in real-time on each child's Chromebook. I would sit with students individually or in pairs and we'd quickly make a short story of 3 to 5 sentences. Then they'd try to crack the puzzle using the story we'd just co-authored. That was lightning in a bottle! Pretty soon every kid in the room was raising her or his hand, asking to make their own story. Thankfully, the Dream Academy staff jumped right in to help. Then some smart cookies figured out how I was doing it and started sharing their own scrambled sentences with classmates. There were stories about Pokémon, princesses, Minecraft, cute animals like puppies and butterflies, siblings, friends, and a tiger versus porcupine smackdown. (This was before Mayweather-McGregor.) One student even made an insane 50-word sentence just to stymie her poor friend. Before I knew it, 45 minutes was up!

It took a lot of cajoling to get all the students to return their Chromebooks to the cart, put their chairs on top of their desks, and line up for dismissal. I was ecstatic that the engagement had originated from the gameplay itself and children's inherent creativity and motivation to solve language puzzles, rather than from any bells or whistles. Although version 1.0 of Scrambled Sentences gives the teacher control over story content, this winter we are making a self-directed version of the game, as another tool you can deploy in the classroom (and beyond).

Together with my colleague, Michael Huckaby (also a former ESL teacher), I repeated a similar test at Burnt Mills Elementary School. We also ran two usability lab tests for grades 1 to 4 and consulted with linguists and language acquisition and cognitive science experts. The result is the Scrambled Sentences game you see here. We later returned to South Lake to try another great new story game called Tall Tales.

The whole Speak Agent team has poured our hearts and creativity into the new games and we sincerely hope you and your students enjoy learning academic language with them!

p.s. Here's a cute video of Scrambled Sentences in action from Take Your Child to Work Day at the U.S. Department of Education last spring:

Note: Dream Academy is currently being renamed Excel Beyond the Bell Elementary. It is expanding to two additional elementary schools in the 2017-2018 school year.