The Story Behind Vocab Lab 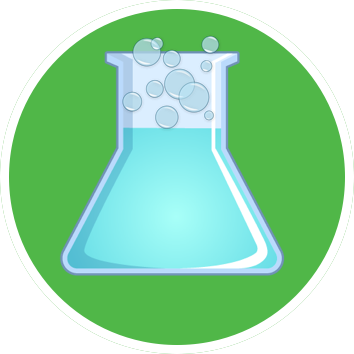 "Vocab Lab" is a word analysis game on Speak Agent that began with the problem of learning "tier two" words. Many experts classify vocabulary into three tiers. While these vocabulary tiers may not apply to English language learners (ELLs) in quite the same way they apply to native English speakers, they still provide a useful framework.

Tier one consists of sight words, common nouns, adjectives, and verbs that are frequently used in social language. There are about 8,000 tier one word families in English. Most ELLs have no problem with tier one words. They may already know many of them, since surveys show 75% to 85% of ELLs at the elementary level were born in the U.S. Even newcomers already know the tier one words in their home language, so a quick translation or demonstration is often enough.

Tier three words, on the other extreme, are specialized terms used only in a particular academic, vocational, or technical context. Think of concepts like hypotenuse, heat energy, torque, amphibian, indentured servitude, or mass production. There are about 400,000 such word families. They don't exactly roll off the tongue, but they do at least have a clear definition.

Tier two words are often the toughest to learn. They can trip up ELLs on standardized tests and layer on extra challenges to learning academic content. Tier two words are frequently used in school, but can be abstract in nature and may change meaning depending on context. Take the word observe. One can observe an experiment in science class or observe an ant farm, but one can also observe safety rules in a lab. How does an English language learner know which meaning applies? To truly understand these types of words, students will need to go beyond isolated vocabulary knowledge and apply the word in multiple contexts. Even students that have a firm grasp of social language need strong academic language comprehension to be able to excel in each content area.

I was curious to see how existing vocabulary apps and websites dealt with this learning problem. It seems the universally accepted solution was simply to match words with their definitions and with synonyms. So, an exercise presented the word observe, often with a definition, and the student chose the synonym watch from a selection of possible answers. That left me deeply unsatisfied. "What about the nuance of these tier two words?" I wondered. "After all, there's a reason we choose one synonym over another!" It's those nuances of meaning that can make or break your understanding of academic language.

For example, observe is not the same as watch, examine, inspect, or monitor. One observes an experiment, watches TV, examines a patient, inspects a package, and monitors a situation. Those synonyms are not interchangeable. While it's nice for students to know that these words are related, the real challenge is to understand the connotations associated with each.

So, I was on the hunt for better (and more engaging!) learning strategies. One source of inspiration was the game "Little Alchemy." In this game, players combine the four basic elements to make hundreds of items. So, water and earth make mud, etc. until you combine enough elements to discover pottery. This led me to an interesting thought: "What if students could combine words they already know to learn words they don't know?" Thus began my vision for Vocab Lab, a game where players combine tier one words to make tier two and three words. After some team debate, we settled on a lab bench environment where players put word combinations into a flask. That way they feel like it's an experiment and not a test. It feels safe to fail and to just see what happens as a result of various combinations.

We put together some gameplay wires and ran it by the awesome experts at WestEd for advice. Thanks to generous support from the NewSchools Venture Fund, they'd put several of their language acquisition and cognitive science experts at our disposal. WestEd suggested a variety of ideas, not all achievable in a game format, but they distilled down to one thing: We needed to give students more context for the words they are learning! The experts were (rightly) concerned that, without more context, students would simply guess the answers until they got it right. While there may be a certain amount of statistical learning that can happen from random guesswork, it's certainly not as good as more purposeful learning through context.

All last year we'd been developing Speak Agent's Academic Language Learning Model with the aim of providing well-rounded learning strategies for developing academic vocabulary and syntax through listening, speaking, reading, and writing, along with appropriate audiovisual supports. In light of WestEd's feedback, we decided to set the stage for the Vocab Lab gameplay using "word stories." These are short, simple passages that put the target word or phrase in a narrative context using a variety of inflections such as singular vs. plural nouns or verb conjugations. Each passage is accompanied by a large photo or illustration and can be played as audio by the student. Another important goal we had was to use a storytelling approach, so as to increase engagement with the content. For tier two words with multiple meanings, we decided to use a different story for each meaning. Our final task was to connect the word stories to the original game concept of combining tier one words to make tier two and three words. The result was Vocab Lab!

The game starts with a narrated short story, accompanied by a single picture like so:

Two scientists went into the woods to observe wild birds. They saw two birds making a nest. Then they watched a female bird lay an egg in the nest. The scientists wrote down everything they observed and went home. 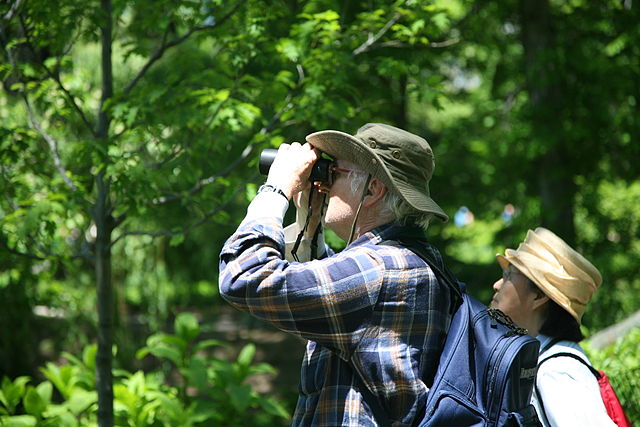 Then the player goes into the "lab" to try and crack the secret formula. She or he can pick anywhere from two to four ingredient words to combine to make the target word (observe). 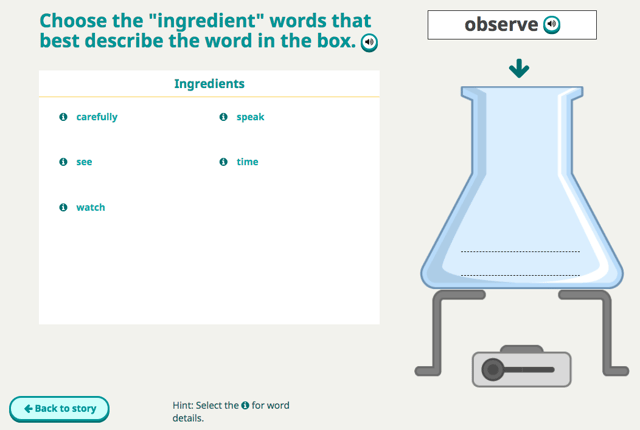 The answer: You may have already guessed the right answer for observe. It's watch + carefully. Speak Agent comes with an ever-growing library of word stories and visuals so that we can customize Vocab Lab to fit the needs of any curriculum at any grade level.

There is one gameplay challenge that has caused students to sometimes have a love-hate relationship with Vocab Lab: The word stories provide context and clues, but they don't always explicitly mention all of the ingredient words that combine to make the target word. That means students often need to -- gasp -- think about the combinations, rather than just memorize words. What they are really doing here is decomposing a word into its attributes, much like decomposition of a number into place values in math class. It can be tough sometimes, which is why Speak Agent lessons always come with an answer key for teachers!

When we usability-tested the game, the word stories were hugely helpful in relaying the word meanings. Students as young as kindergarten were able to pick the right ingredients without blindly guessing. We also validated our strategy of using the target word in multiple contexts in those word stories, since it better clarified the meaning. It got kids thinking about the different forms a word could take. Now the ingredients (tier one words) became like keywords or shorthand definitions for the target word, serving as a memory aid. Before WestEd's analysis, our original game concept had the words just floating around without the narrative context. Clearly, we made a big omission in our original game design. See, this is why we consult the experts -- early and often!

Find me on:
LinkedIn Twitter
Previously:
Reading texts are best aligned with content, not skill levels
Next Up:
Next Rethinking Personalized Learning: The End of Average