The Story Behind Tall Tales

I walked into the MediaBarn User Experience Lab thinking that I knew exactly how the first, second, and third-grade students would use our new learning game prototype. "Tall Tales" is a Mad Libs™-style cloze activity where kids fill in the blanks by selecting words to go with each category. One key difference from Mad Libs is that our stories relate to academic standards in science, history, language arts, and other subjects. Another difference is that the words have illustrated symbols or photos to help emergent readers, and every word and line of text has audio support. The learning goals are to categorize target words and to apply them in the context of a discourse. Contextual clues are often found in previous or subsequent sentences.

I thought I knew how students would use the game based on 12 years of designing children's educational software, including 6 years at PBS KIDS, and my experience observing dozens of tests in varied environments. What I thought would happen was that kids would pick the distractor words to make the silliest, goofiest story they could possibly make. But kids always manage to surprise us adults. Instead of making silly stories, they were laser-focused on completing the story so it made perfect sense. They wanted to get the right answers. It was the challenge that was the fun part, not being silly! I witnessed the exact same behavior at an unstructured event at the U.S. Department of Education, where about 25 students from kindergarten up to fourth grade played the game, as well as in a classroom environment at Burnt Mills Elementary School filled with yet another 20 second-graders in an afterschool program.

While Chris Raymond, our supremely talented lead designer, and I sat there bemused, staring at the game screens, we started thinking about why kids viewed this game differently than Mad Libs. Why weren't they being silly? Based on my interactions with over 80 students by this point, I'd learned that the overt educational nature made it clear that it wasn't a silly game. Their first clue was that the stories were related to classroom themes. Topics included the butterfly lifecycle and the weather. Another clue was the corrective feedback for right and wrong answers, mild as it was. (Words have to be both a semantic and grammatical match for each blank.) This realization made them want to not just learn, but to master the words and get everything correct. For them, learning was more fun than being silly! "What a bunch of over-achievers," I thought. But I was secretly glad that the educational content had engaged and challenged them so much that it was the prime motivation for playing the game.

Our next step was to survey classroom teachers. As a result of their input, we added more specific corrective feedback so that when a student gets an answer wrong, we could be more specific about what was wrong. So, for example, if a child put a noun in a verb slot, the game not only says we're looking for a verb, but also explains what a verb is. This is done with text and audio that is contextual to the word choice. Typically, the audio only runs if the player clicks the audio button, so we don't have a game that constantly squawks at you. Another cool feature is that students can hear their completed story read aloud as text-to-speech. And, thanks to Chris' handiwork, the game looks pretty stunning on a big screen, so teachers can foster co-learning on an interactive whiteboard or laptop or tablet hooked to a projector. 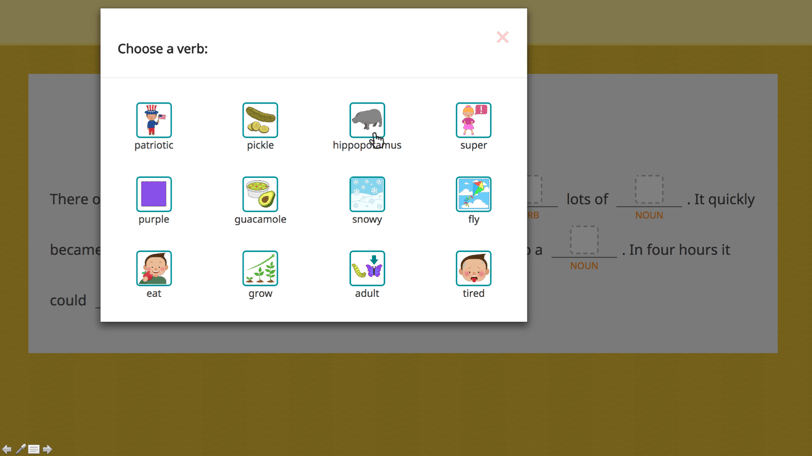 After much student and teacher feedback, our lead developer Fernando "Ferni" Delgado worked furiously on the final game adjustments just as Category 5 Hurricane Irma was bearing down on his home in Puerto Rico with 185 mile-an-hour winds. He laid down the last lines of software code while running on spare battery power and with no running water. Ferni used his mad, mad programming skills to release an improved version that looks like this: 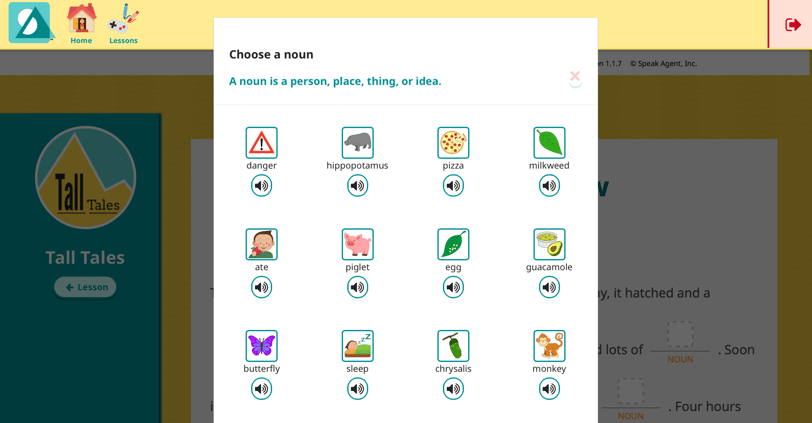 If you haven't yet tried the game, please take a look at our Tall Tales web page, which includes screenshots and a demo video for your viewing pleasure. The final product owes much to the 80 kids who play-tested it with us. We sincerely wish that you and your students enjoy it as much as they did!

Find me on:
LinkedIn Twitter
Previously:
Speak Agent "Pro" Now Available
Next Up:
Next Visit us at Beta City